Sydney orthopaedic surgeon and human rights advocate Munjed Al Muderis has been named NSW Australian of the Year for 2020 after he overcame “extraordinary” obstacles to perform work that helps people throughout the world.

Professor Al Muderis, who was detained on Christmas Island and in several Australian jails after he fled Saddam Hussein’s regime by boat, is a compassionate ambassador for several organisations and advocate for asylum seekers and refugees, award organisers said in a statement on Monday.

He has taken a team to his former home country Iraq seven times, at his own expense, to help victims of the conflict he fled.

“His surgical innovations and breakthroughs are helping Australians and people throughout the world,” Monday’s statement said.

“Munjed exemplifies the valuable and positive contribution that refugees can make – leading by example what it means to be Australian.” 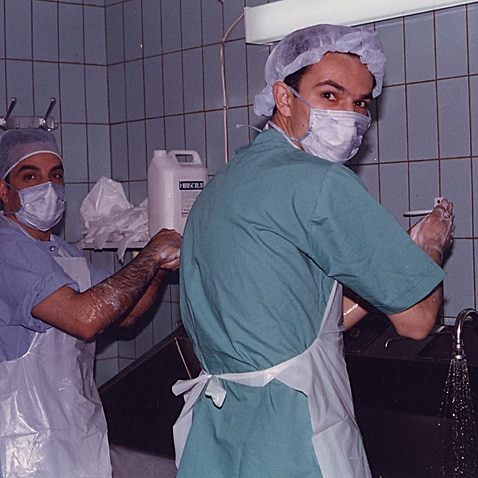 First Day: The pioneering surgeon who came to Australia on a leaky boat

Mr Tutt, 27, gathers donations for science resources through his organisation Deadly Science and sends them to remote schools throughout Australia.

“Corey’s actions inspire Indigenous children to believe in themselves and understand their environment – for the benefit of Australia and all its people,” organisers said.

“He and his extraordinary team have helped more than 1,000 children reconnect with their education, training, families and community, offering them love and support to live out their hopes and dreams.”

“They are making a huge difference to the lives of others and to the world in which we live,” she said in a statement.

Premier Gladys Berejiklian said the 60th anniversary of the awards offered “a special opportunity to recognise those who make a real and lasting difference in NSW”.

“Every year I’m inspired by the stories of the recipients, and this year is no exception,” she said in a statement.